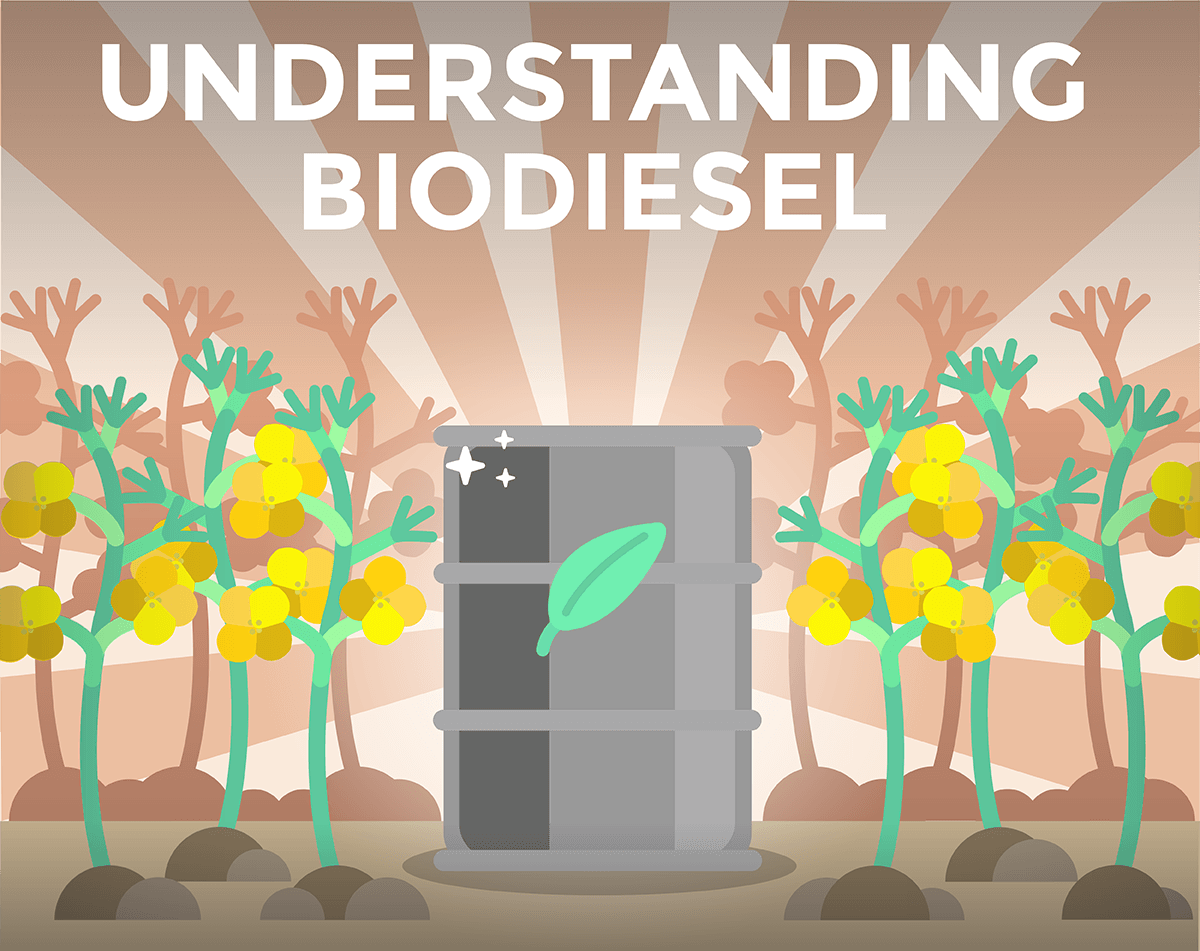 There has been a lot of mixed messaging surrounding the rise of biodiesel. While many governing bodies have touted an extensive lists of performance and environmental benefits, many early adopters have experienced unexpected downsides that are seldomly addressed.

In this article, we will cover what biodiesel is, the history, emergence, and benefits of this “new” fuel, and how many consumers can protect themselves from the issues that arise from biodiesel consumption.

Biodiesel is a biomass-based diesel fuel derived from plant oils and animal fat and is generally known as an environmentally cleaner alternative to petroleum diesel. The procedure to create biodiesel involves a process called transesterification where plant or animal oil, alcohol, and a catalyst are all combined and heated to induce a chemical reaction. The purpose of this reaction is to breakdown triglyceride molecules into long-chain esters and glycerol molecules. The glycerol byproduct is simply collected and sent off for other uses such as making soaps.

The long-chain esters make up the biodiesel and are very similar to the hydrocarbon chains found in petroleum diesel. 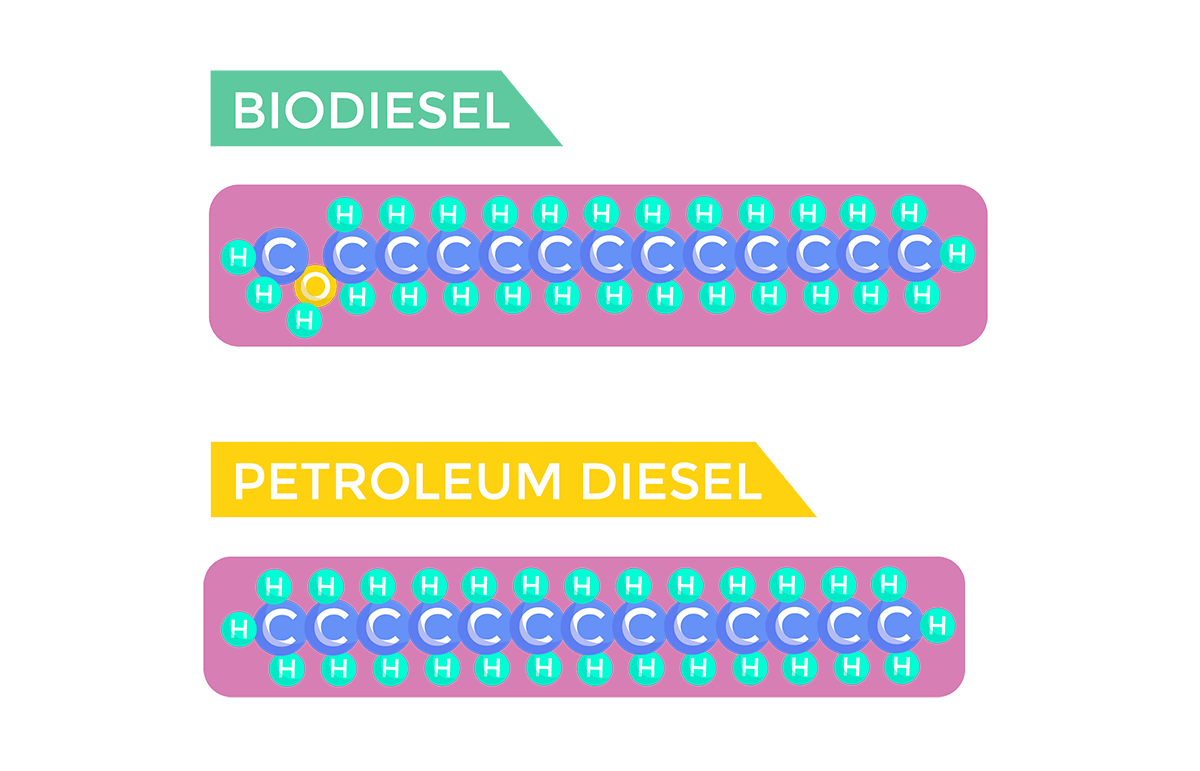 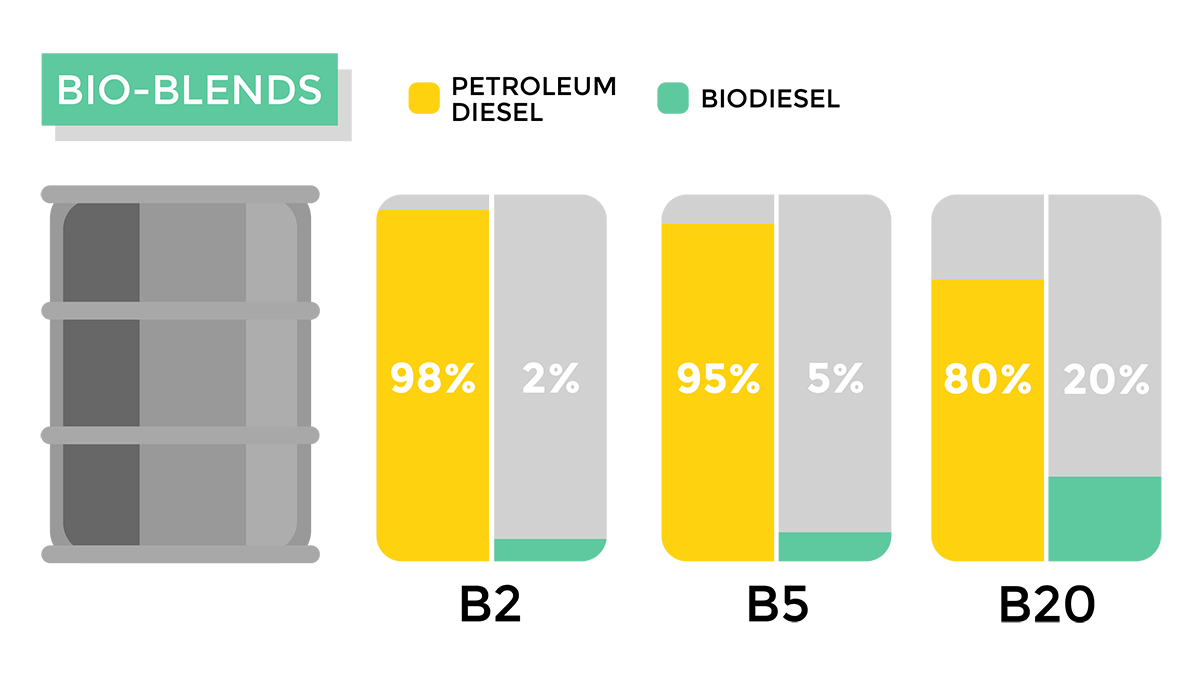 The most popular bio-blends are produced with biodiesel to petroleum diesel ratios of 2% (B2), 5% (B5), or 20% (B20). In some instances, pure biodiesel (B100) is also produced and used for various applications.

The History & Emergence of Biodiesel

1890’s: The first diesel engine was invented by Dr. Rudolf Diesel. The engine ran on pure vegetable oil aiding in Dr. Diesel’s vision to provide fuel for remote agriculture applications where petroleum products were not readily available. Unfortunately, Dr. Diesel’s vision for biofuel was not to be fully realized until nearly a century later.

1910’s: Shortly after Dr. Diesel’s death, petroleum became widely available and incredibly cheap. This solidified the rise of petroleum diesel in the world economy and heavily influenced the design of future diesel engines.

1930’s: A Belgium inventor proposed using transesterification to convert vegetable oil into fatty acid methyl esters, better known today as modern biodiesel. This process would help reduce the viscous nature of vegetable oils which was often viewed as a major barrier for its use in more modern diesel engines. 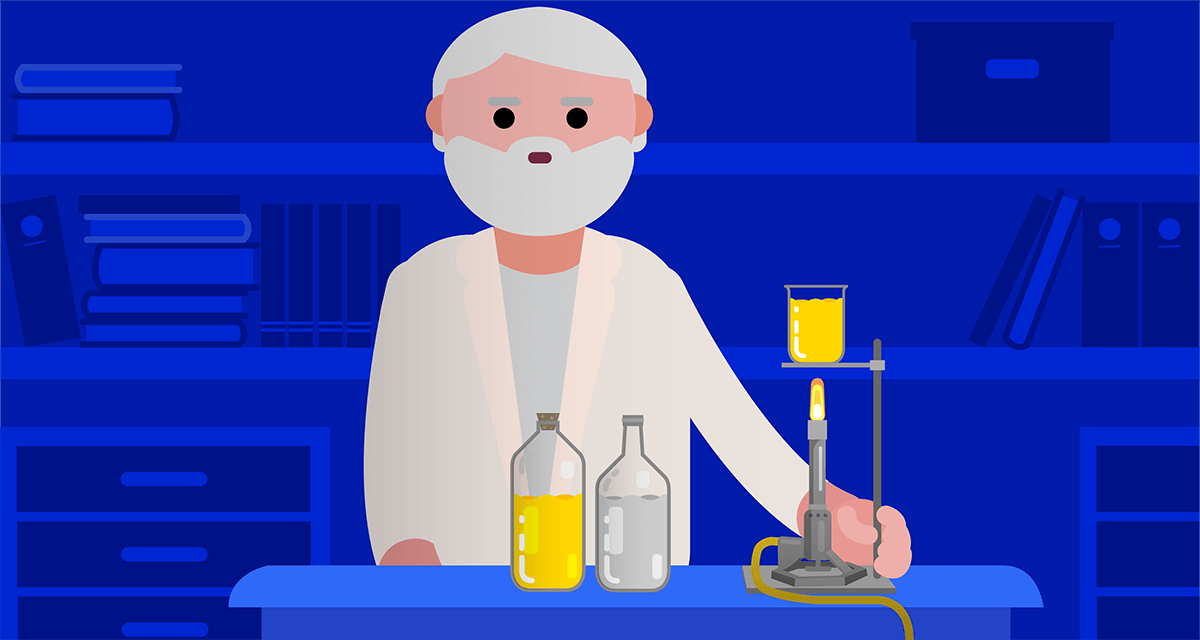 1980’s: Concerns over the environment, energy security, and overproduction of produce brought biodiesel back into the conversation as a petroleum diesel alternative.

1990's–2000's: Works to further perfect biodiesel was carried out in Europe and South Africa, eventually leading to the rise of the biodiesel industry internationally. The United States lagged in its adoption of biodiesel due to the low prices of petroleum diesel. In the aftermath of 9-11, biodiesel quickly became a household name due to rising oil prices and increased awareness of the United States’ lack of energy independence. 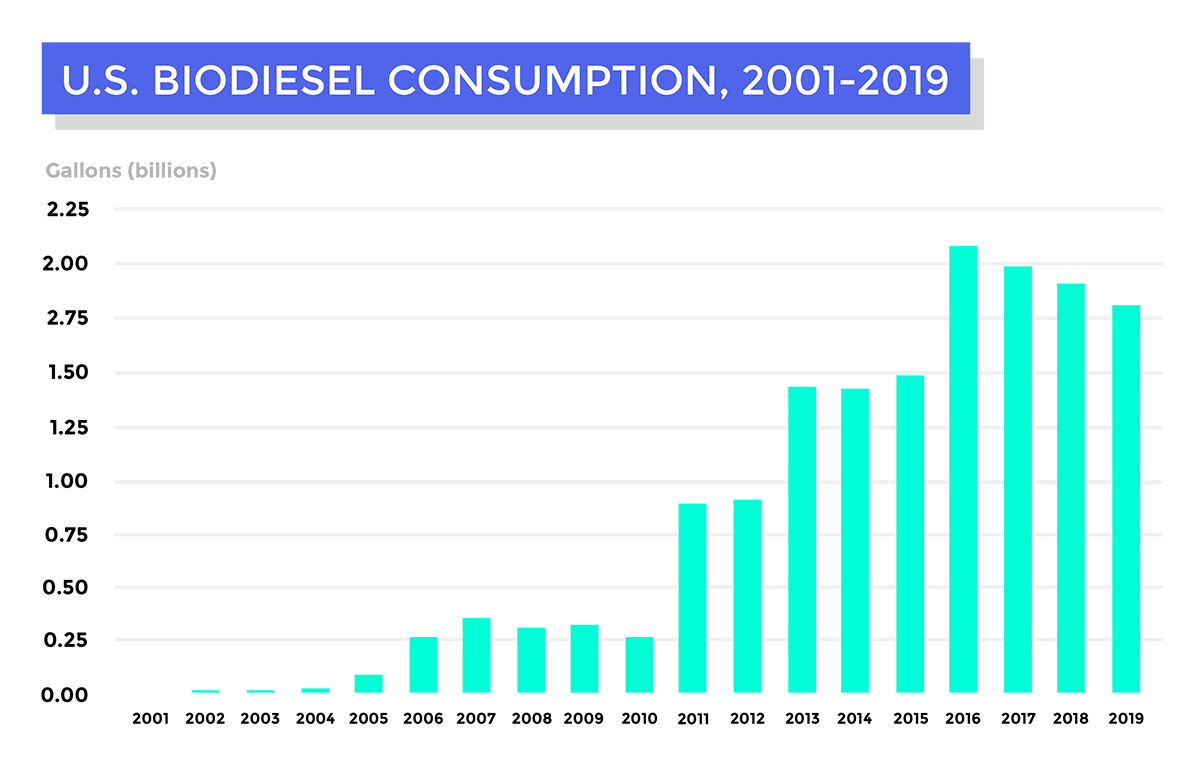 Since 2016, biodiesel consumption has remained relatively steady with slight decreases due to new tariffs on cheap biodiesel imports.

The Benefits of Biodiesel

Being a more expensive alternative to petroleum, biodiesel adoption is largely due to its numerous advantages and government incentives. The most significant benefits biodiesel holds over petroleum diesel are outlined below:

#1 Renewable Energy Source: One of the more apparent benefits of biodiesel is the fact its sources can be grown. As previously covered, biodiesel is derived from plant oils and sometimes animal fats, both of which can be readily reproduced as needed. In addition to these renewable sources, biodiesel can also be created from used cooking oils, giving purpose to something that would otherwise be regarded as waste.

#2 Carbon-neutrality: The US government considers biodiesel to be carbon-neutral. This means that the process of producing and consuming fuel has a net-zero effect on CO2 emissions. The CO2 absorbed by the crops used to create biodiesel is enough to offset the CO2 produced when burning the fuel. 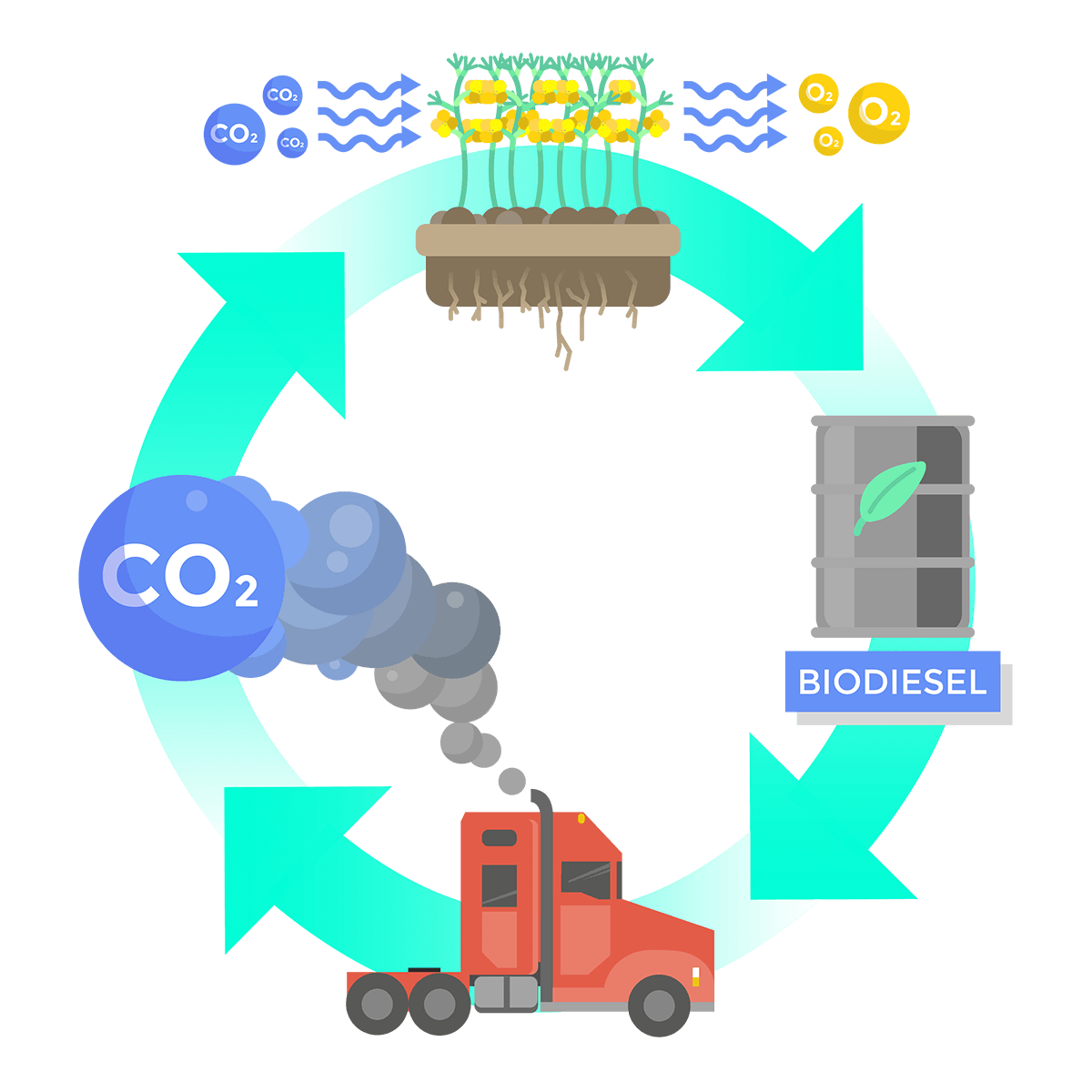 In all, biodiesel has been shown to produce 78% less CO2 emissions than petroleum diesel.

#3 Emission Reduction: In addition to being carbon-neutral, biodiesel has been shown to emit lower levels of harmful pollutants than petroleum diesel. This includes carbon monoxide, hydrocarbons, particulates, and other air toxins responsible for environmental damage and adverse health effects. 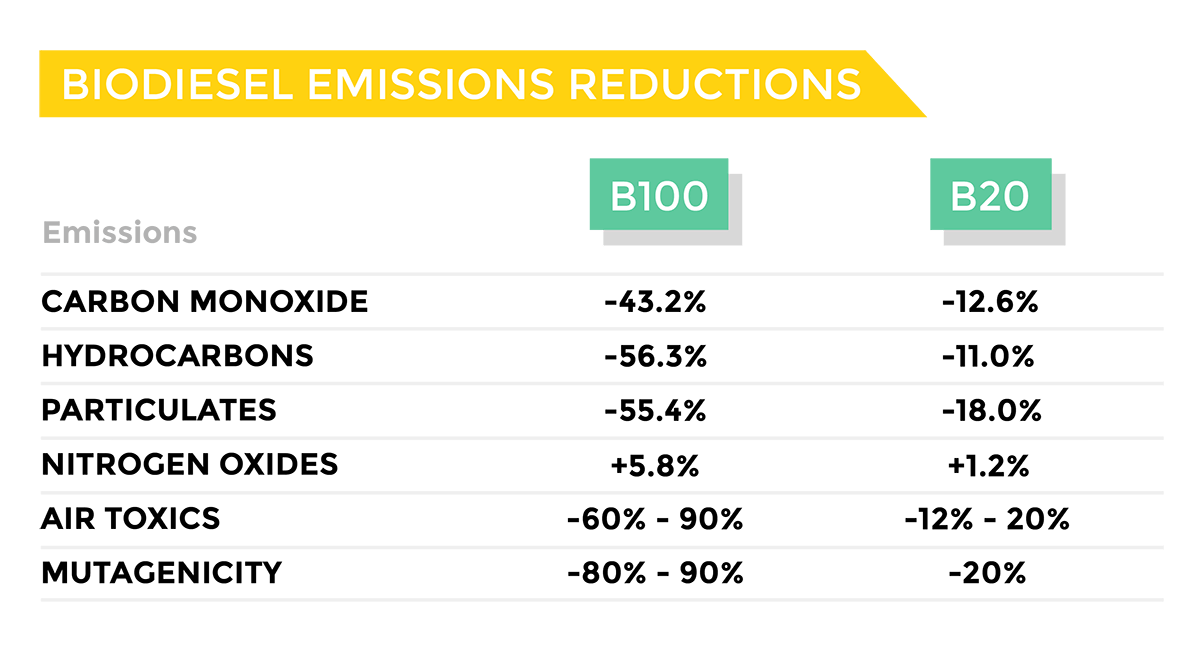 The only exception to this rule would be nitrogen oxide emissions which have been shown to be slightly higher when burning biodiesel.

#4 Enhanced Lubricity: Bio-blended diesel has been shown to have superior lubricity over traditional No. 2 diesel fuel. This is a welcomed advantage as current hydrotreating processes have been stripping petroleum diesel of its lubricity compounds in order to make ultra-low sulfur diesel (ULSD). Federal mandates have required a significant reduction of sulfur content in diesel fuel in order to combat harmful sulfur oxide emissions. Biodiesel has been shown to have naturally lower levels of sulfur making it a good option for decreasing overall sulfur levels in addition to maintaining lubricity in bio-blended diesel fuels. Improvements in fuel lubricity decreases wear on engine parts, thus improving the longevity of those moving components.

#5 Higher Cetane Ratings: Another benefit biodiesel provides for engines is its higher cetane rating. Although there is no benefit to having a higher cetane rating than what the manufacturer recommends, there is reassurance that the fuel burned does not fall below the specified cetane rating which can result in serious harm to the engine.

#6 Environmentally Safer: Aside from being carbon-neutral and emitting lower levels of harmful emissions, biodiesel is generally regarded as environmentally safe. According to the Alternative Fuels Data Center, “Biodiesel is no more toxic than table salt” and if spilled on the ground it would “quickly degrade into natural organic residue”.

#7 Engine Compatibility: With a fuel that, on many dimensions, is superior to petroleum diesel, one may question its compatibility with modern diesel engines. Fortunately, biodiesel is very much compatible with almost all diesel engines produced after 1993. Equipment produced before 1993 may have featured rubber seals throughout the fuel system which have been found to not be compatible with 100% biodiesel. For these older engines, bio-blends like B20 have been found to work just fine.

Protecting Yourself from the Downsides of Biodiesel

The downsides of biodiesel are hardly enough to offset the numerous benefits outlined above, but they do present real challenges for use in cold climates and long-term storage.

Fuel Gelling: Diesel has long had a reputation for gelling in cold temperatures, where the fuel solidifies into a waxy gel-like substance that is unable to be pumped into the engine. Biodiesel has been found to be much more susceptible to gelling than petroleum diesel. If not addressed, cold weather gelling can render an entire fuel supply or engine unusable.

When comparing petroleum to biodiesel performance in cold weather, one can see how biodiesel will begin solidifying much sooner than traditional No. 2 diesel. This reality has driven many fuel suppliers to switch away from biodiesel in favor of petroleum diesel in the winter months.

To combat cold weather gelling in diesel fuel, anti-gelling agents are usually blended into the fuel to mitigate the problem. These winter blends are normally sold standard at the pump and can be further enhanced with stronger aftermarket additives for extreme temperatures.

Navigating the additive aftermarket, especially for anti-gelling solutions, can be difficult due to deceptive marketing language. Note that any vague statement like “improves” or “helps to” usually indicate the product is a less serious or untested solution. This does not mean these formulas do not work but they do lack the hard claims necessary to ensure your fuel does not gel in certain cold weather conditions. Hard claims will typically include a temperature rating for pour point or, the more stringent variable, cold filter plug point.

Microbial Contamination: Fuel contamination is an issue that has been plaguing diesel since its inception but, just like gelling, biodiesel has been found to be more susceptible to microbial contamination when compared to its petroleum cousin. This is largely due to the biofuel having a higher affinity to water, the known catalyst for rapid microbial growth in diesel fuel.

Once the water falls out of solution and forms a layer below the diesel fuel, the bacteria and fungi in the fuel will reside in the water and begin to feed off of the fuel itself. In time, these microbes will begin over proliferating, forming a sludge largely composed of dead microbes and their digestive byproducts. This sludge can be detrimental to any fuel system as it begins to clog onboard filters and damage engine components. 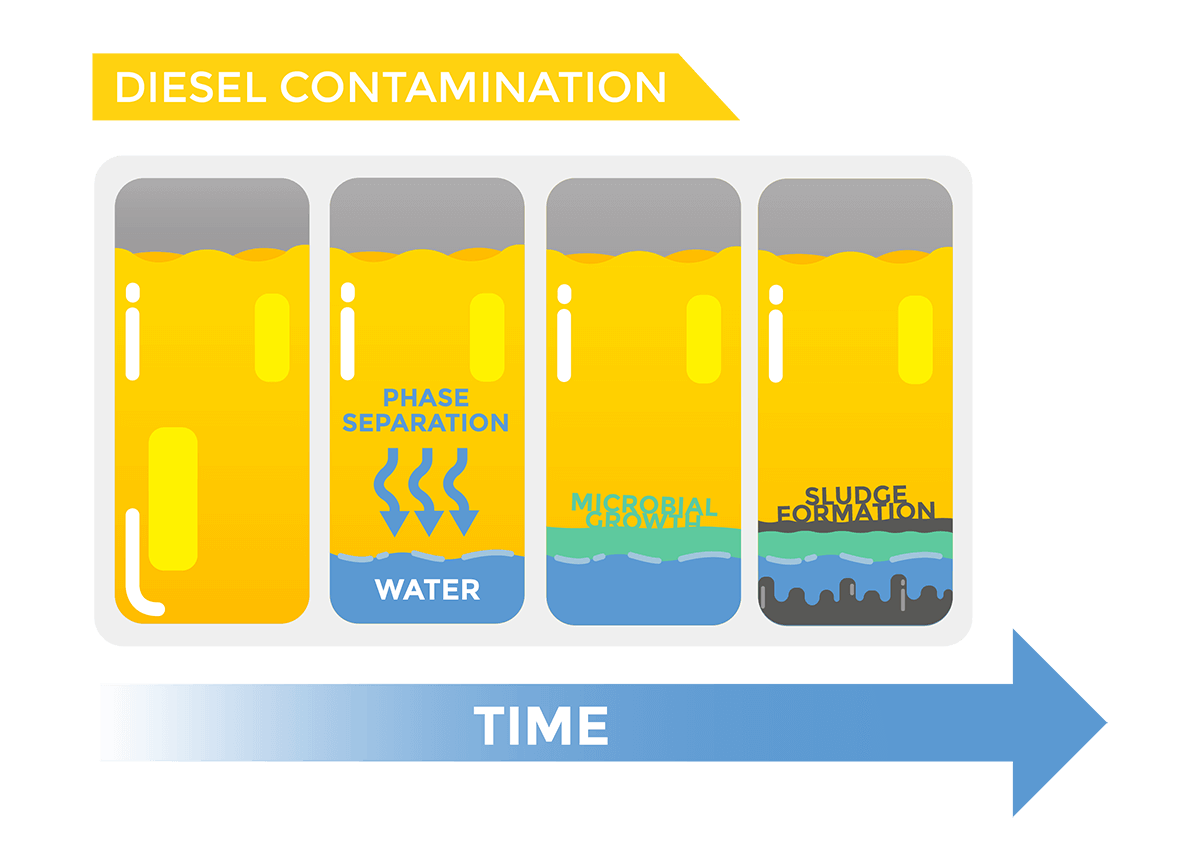 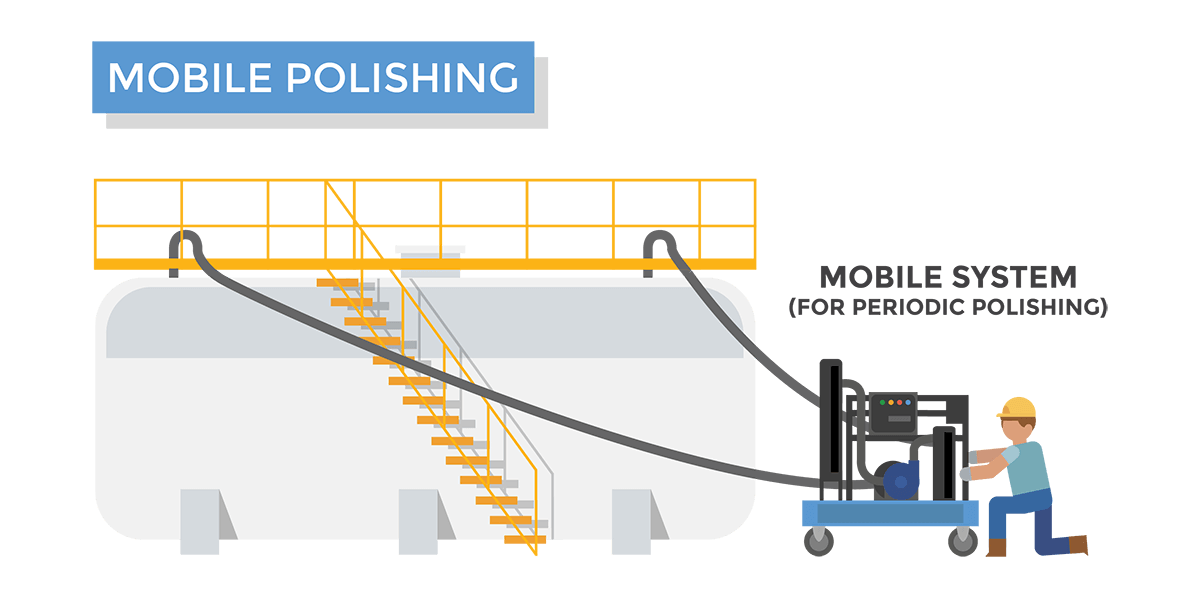 Automated fuel maintenance involves a permanently installed fuel maintenance system which will run off a programmed schedule to regularly filter the fuel. These solutions are preferred over mobile servicing as they consistently ensure the fuel supply is free of contamination. 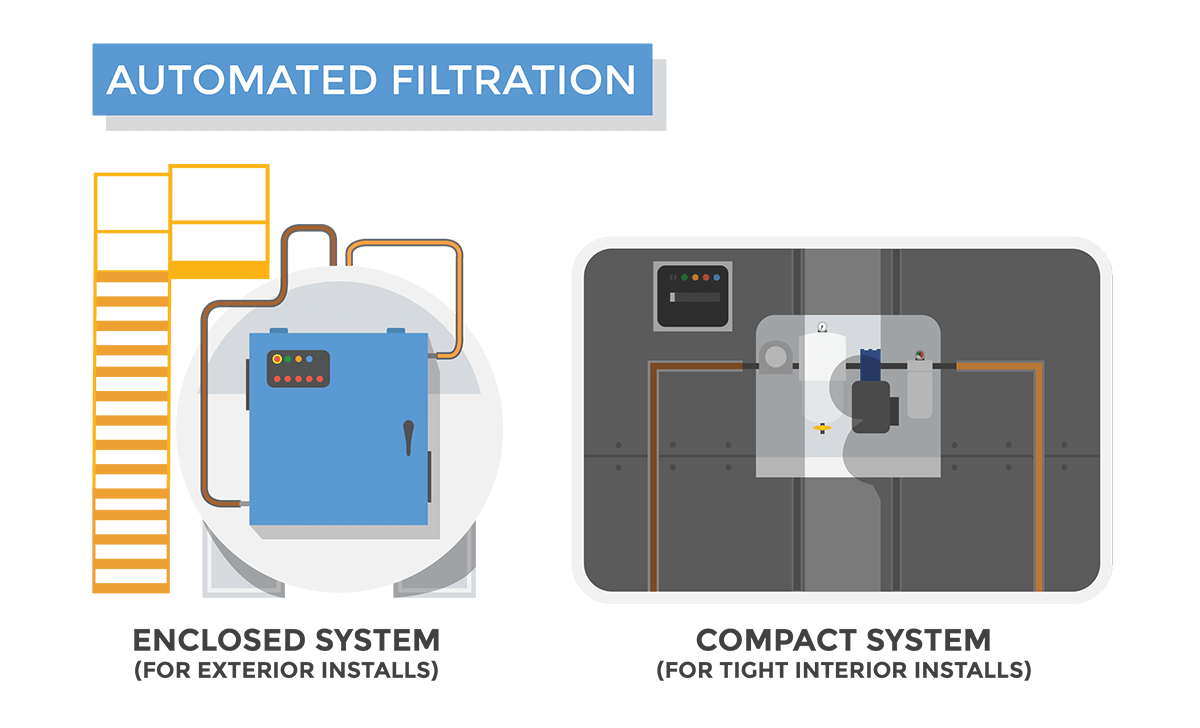 For more on all thing fuel, head on over to our AXI University page.