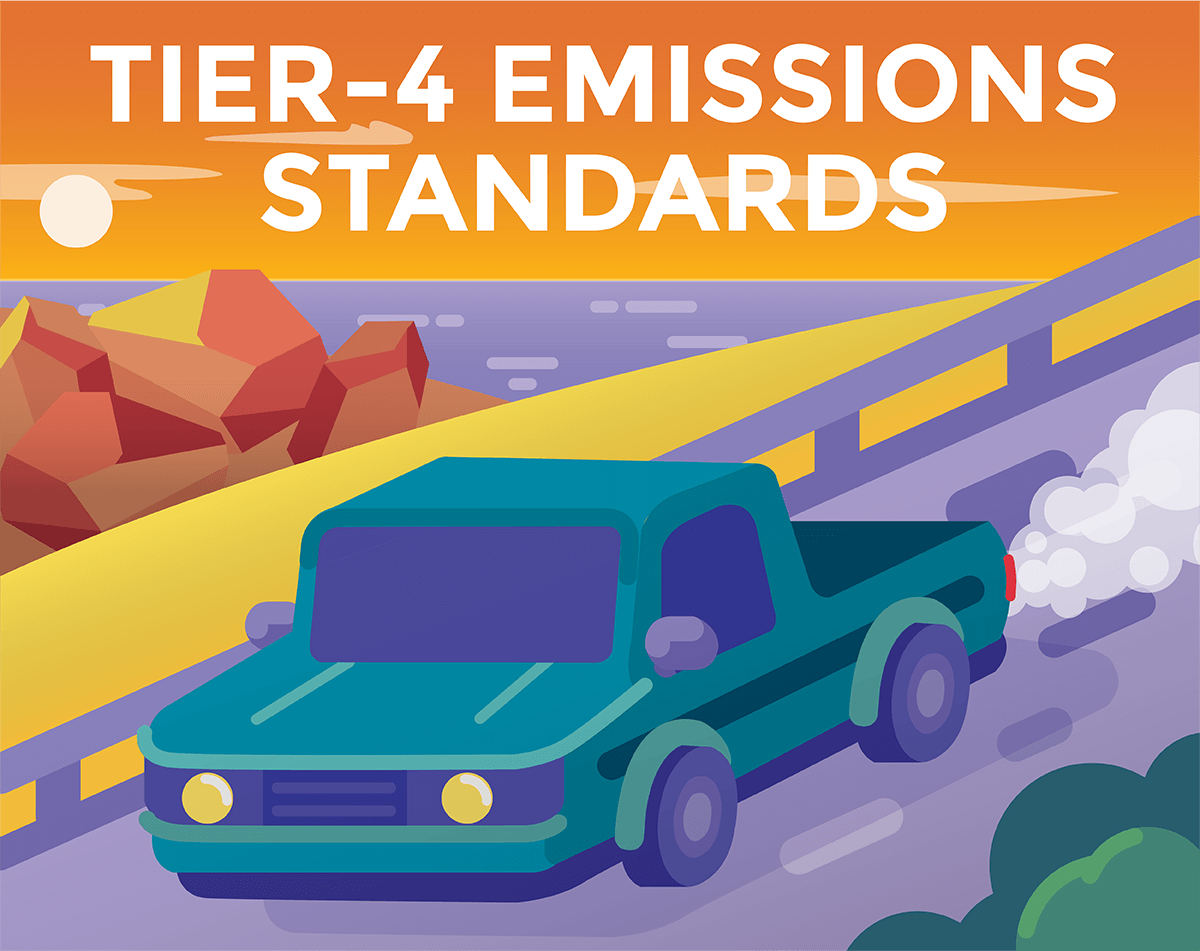 Engine emissions and the concerns around the potential harmful effects on people and the environment has been a growing conversation over the last few decades.

With a focus on these harmful emissions, the Environmental Protection Agency (EPA) has since implemented regulations to reduce various kinds of harmful exhaust emissions in both on-road and nonroad (or off-road) engines.

These regulations were aimed to improve the efficiency of a diverse range of equipment including generators and gensets, forklifts, tractors as well as other types of construction, agricultural, and industrial equipment.

By introducing these regulations through phases, the EPA was able to give engine manufacturers, engineers, and the market itself the time required to develop the necessary technologies to meet future compliance.

Before the EPA introduced the tiered emissions standards, the Clean Air Act set air quality standards in the United States. The EPA Tier standards simply expanded on these regulations with an aggressive focus on non-road diesel engines.

Through the 50s and 60s, the health impact of smog was of rapidly increasing interest to the general public as they gained publicity across the nation.

With a majority of urban-metropolitan areas (such as New York City and Los Angeles) across the United States being impacted by lingering smog from various mechanical & industrial emissions.

Enacted in 1963, the Clean Air Act is seen as one of the most stringent air quality regulations around the globe.

As science and public knowledge has grown through the following decades, the Clean Air Act has been amended accordingly, with the latest amendment being passed in 1990.

An exemption was included in the Clean Air Act allowing California to set their own emissions limits. By establishing the California Air Resources Board, the State of California was able to make their restrictions even more strict than the federally recognized EPA standards.

The EPA may also approve other states to opt into the California Air Resources Board standards.

Introduced in 1991, because of the growing public concerns for harmful exhaust pollution, the EPA published Tier 1 standards to reduce engine emissions and was then phased in through the late 1990’s.

These regulations increased federal authority and furthered the government’s responsibility by allowing them the power to issue and deny operating permits on regulated equipment.

Between 2006 and 2008, Tier 3 standards were implemented, restricting exhaust emissions for engines between 50 and 750 horsepower.  Through 2010, highway engines would be required to have advanced exhaust treatment systems to reduce harmful emissions.

The EPA finalized a new emissions standard for automobiles and gasoline fuels in March of 2014 under Tier 3. These standards are currently being phased-in from 2017 and will be completely implemented in 2025. 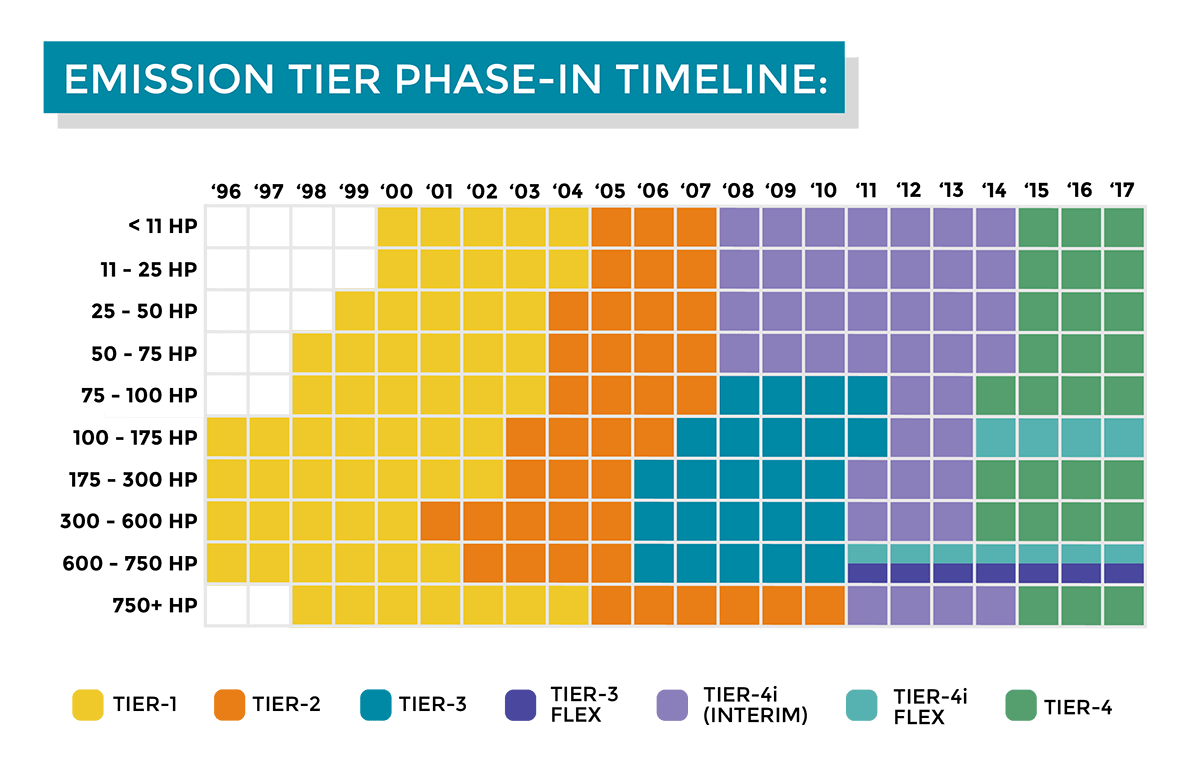 The goal in Tier 4 was to significantly reduce NOx and PM emissions, while CO emissions limits remained the same from Tier 3.

Tier 4 also brought a new ultra-low sulfur diesel fuel to achieve emissions targets. As we’ve grown familiar with ULSD through its expanding use, we also now understand all the pros and cons of ULSD.

The estimated costs of adding the emissions equipment ranged between 1-3% of the total equipment price. The EPA suggested that the efficiency savings alone would dwarf the additional costs of the equipment.

To achieve these various advancements in mechanical efficiency, various components within combustion engines themselves had to be redesigned and engineered to operate and function with federal standards in mind.

Engines at their core had to be redesigned to operate on finer tolerances than ever before. Engine design technologies were advanced, with fuel injection timing being improved to limit NOx and PM emissions.

Exhaust systems were a priority target for these EPA emissions standards, and manufacturers had to introduce new technologies to help combat harmful emissions. Selective Catalytic Reduction (SCR) was introduced into the exhaust systems to reduce NOx levels.

Because of the increased regulations and standards, engine manufacturers were able to design and develop technologies that reduce the negative impact of harmful emissions on people and the environment.

As of the writing of this article, the EPA hasn’t put forth any future changes in emissions standards beyond what’s known as Tier 4 standards.

However just recently, the EPA has put pressure not on engine manufacturers, but rather on the automotive “aftermarket” where automotive hobbyists are “removing hardware or software designed to defeat pollution controls”.

Hobbyists are doing this for performance improvements to either increase power or towing capacity through removing restrictive systems. Through various enforcement actions, the EPA has addressed violations by a number of diesel mechanic shops.

This work is often done under the understanding that it is for nonroad use only, which could be seen as a loophole by many.

However, the EPA has recently exercised efforts to enforce action against these companies as they believe it violates federal provisions that exist to protect the public health.

According to the EPA, “Illegally-modified vehicles and engines contribute substantial excess pollution that harms public health and impedes efforts the EPA, tribes, states, and local agencies to plan and attain air quality standards”.

Moving forward, we can only assume that the EPA will continue to strive for advancements in both engine efficiency and emissions. But, with alternative energy sources becoming more feasible, the EPA's next round of serious regulations may not be directed to exclusively internal-combustion engines.